So this is me back in college, during some of the darkest days of my eating disorder. We were taking promo photos for a booking agent, and all I can remember is how fat and gross I felt. I thought I was huge, ugly, and hopelessly flawed. When I look at this photo now, I wish I could reach back in time, give that girl a hug and tell her that she's beautiful. Tell her that she doesn't need to keep torturing her body. But most of all, I wish I could tell her one of the most important things I ever learned in recovering from an eating disorder....Fat is NOT a feeling. 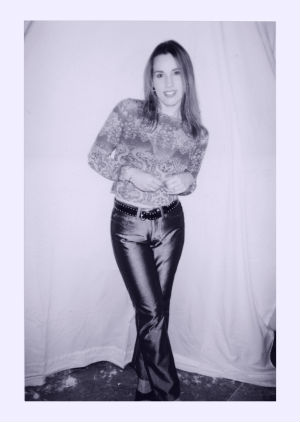 The first time I heard this, it seemed completely idiotic. Of course, fat was a feeling! Fat must be a feeling because it was ALL I'd been feeling for almost as long as I could remember. I cast my skeptical gaze toward my nutritionist who had spoken the words and who specialized in treating eating disorders. Obviously, it wasn't her first rodeo because she pulled out a diagram illustrating something that was to become a revelation in my world.

It was a drawing of a girl who had come to a fork in the road. "This is what happens when you encounter a problem or a powerful feeling," she began slowly. "This fork in the road represents facing the problem or feeling, but here's what happens when you don't know how to deal with it." She pointed to the other path, punctuated by the words, "I feel fat."

Hmm...okay maybe. But I wasn't all that convinced by a silly diagram. It seemed perfectly logical to me that the real reason I ‘felt fat' was because I truly was fat. Still, the message had rattled my cage and got me thinking about whether or not there could be something else going on.

Little by little, I began paying more attention to those ‘fat' feelings, and I started to notice that they regularly intruded when I was feeling anxious about a relationship, stressed out over a creative project, exhausted from touring, or even when I had stagefright. As much as I hated to admit it, there did seem to be a pattern. 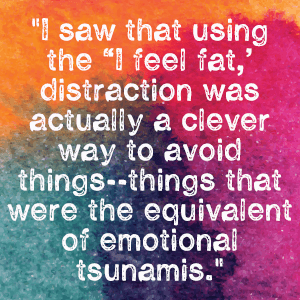 Then one day, I had a lightbulb moment while I was journaling. I saw that using the "I feel fat,' distraction was actually a clever way to avoid things--things that were the equivalent of emotional tsunamis. It was so much easier to look at a problem like "I'm fat," and solve that bad boy by getting thinner! It was even fun, in a warped way, to obsess about exactly the best plan to do it. Much, much, much easier to sort out than the kinds of problems facing lots of people in recovery, like abuse, trauma, shame and grief. Yep, I'll take fat any day!

Only it doesn't keep working so well once you get a peek behind the curtain, and now I had seen too much. So what's a girl to do? Obsessing over my body wasn't stopping me from feeling other feelings anymore. All those emotions & memories were coming up fast and furiously, demanding my attention--asking to be released and healed. I literally started dreaming of tsunamis. Just me standing there frozen with fear, as a monstrous wave crashed down on me. Apparently part of me was ready to face this crap, but it had to drag the rest of me kicking and screaming.

At least the good thing about hitting bottom, is that you finally get to go up. With a lot of help, I started tackling the feelings one by one, along with the skeletons in my closet. As much as it sucked, it was working. I was coming back to life, like waking up from a bad dream. Sometimes I still felt ‘fat', but now I felt a whole range of other emotions too. Which wasn't all bad. The thing you don't realize about bypassing your emotions with the fat path is that it cuts off most of the good feelings too. It was a pretty nice surprise to find that I could laugh, feel alive & even hopeful again. Before too long, I started dreaming about surfing on tsunamis.

Fat is not a feeling. It's a decoy at best, and a dangerous, destructive path for anyone who travels too far down that fork in the road. If I had a time machine and could plead my case to the girl in the photo, I would say, "I know you think this all about your body. That if you could be perfect, then your entire life would be perfect. But you're wrong. Perfection is a bold-faced lie--a road to nowhere. It's okay to be afraid to face your fears and your past, but don't let it stop you, and don't try to do it alone! The only way to have the amazing life that you want and deserve is to find the courage to feel and the willingness to heal." I'd probably also warn her about a couple of Class A losers destined to cross her path & one particularly bad haircut notion. Might as well, if I'm going to go messing around with the space time continuum ;-)

Want to know more about how to break free from the vicious cycle of “I Feel Fat?” Check out this insightful and creative book by therapists Andrea Wachter & Marsea Marcus, Mirror Mirror on the Wall: Breaking the ‘“ I Feel Fat Spell.” Yep, it’s a children’s book but it’s a powerful read, full of invaluable tools for all ages!